The school has been over us like a rash asking about our next step in life. A levels, IB, Uni, Gap years, Different schools – you name it. Various workshops and activities have been set up for us over the past few weeks designed to help make that next step easier for us and for them. The multiple assemblies, open evenings and booklets and leaflets have been a help but haven’t really made me jump out of my seat with excitement. To be honest I was expecting the same from today’s Focus Day based on Modern Foreign Languages (MFL). As we all sat down preparing to take in another hour long assembly expected to drag and drag I noticed how the talk’s topic appeared to stand out in front of me – The Life of a Sports Journalist.

For a long time now I have wanted to be a journalist in the sports area as I attempted to combine my love for sports with my love and skill for writing. The talk then began to appear much more appealing – for me at least. The guest which appeared before us was called Chris and he told us about his life as a sports journalist. This was perfect for me as it gave me the chance to realise what my dream job would really be like and what challenges I would face.

He talked about the jargon journalists used, the way they talk to sportsmen, the way they work, how much they work etc. But most interestingly, he spoke about the use of foreign languages in Sports Journalism and how this would make you stand out from the rest. This made me think. The school has been encouraging us to think of the subjects we’d like to take to a higher level and whilst French had been acknowledged it was seen rather as an outsider if my grades are not met for say History or Geography. But the way he empathised how major companies would ask for languages told me that I shouldn’t undermine the subject.

Later on in the day Chris gave us the chance to become reporters ourselves as he acted as the presenter in a two-way conversation commonly used in this profession. I volunteered to speak and although the nerves began to get the better of me as I spoke in front of the whole class with a microphone to my mouth I soon got into a rhythm and began to cut out many of the filled pauses I had been using early on. I received great praise and applause form my peers, teachers and Chris himself which boosted my confidence ever more. From that moment on I have been convinced that journalism is the route I want to go down. Now I feel I have the qualities, the skills and more importantly the willingness to do this job.

So overall today has benefited me well in looking forward for my life choices. I have begun to really become serious at working towards this occupation.

Just think about it, in a few years time the below computer generated picture could be a reality. How great would that be? 🙂 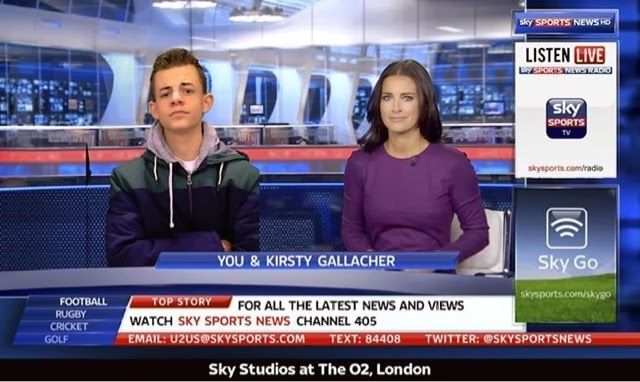